Kinsta is a managed WordPress host and the first WordPress host to offer cloud hosting powered by Google Cloud Platform. They were founded in 2013 and have grown to become powerhouses in the WordPress industry.

In this post, we’re going to cover what Kinsta has to offer and at what cost. We’ll also take a look at its hosting infrastructure and developer options. Let’s start with pricing and work our way down from there.

Kinsta Pricing and Overview of Plans

Kinsta has among the most flexible hosting plans in the managed WordPress hosting industry. They offer 10 fixed-rate plans and a custom plan for enterprise customers who need more than what the Enterprise 4 plan offers.

Pricing for plans starts at $30/month for the Starter plan and maxes out at $1,500/month for Enterprise 4. There are plenty of tiers to choose from between these plans depending on your needs and budget.

Here’s a basic overview of the first six plans:

These features keep increasing until they reach 3 million visits and 250GB of storage for Enterprise 4. All plans are backed by a 30-day, money-back guarantee, and you’ll receive two months free of charge when you pay annually. All plans also come with free SSL and CDN services through Kinsta’s partnerships with Let’s Encrypt and KeyCDN. 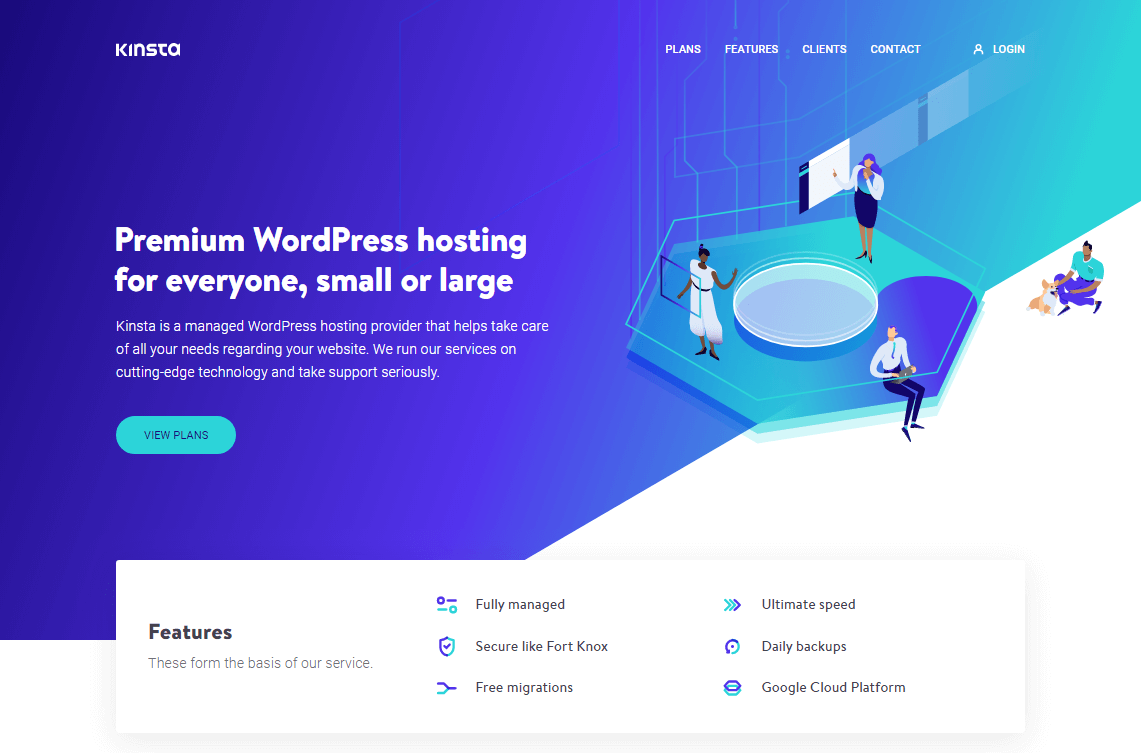 So, what sets Kinsta pricing apart from plans offered by other managed WordPress hosts? Let’s use Kinsta’s biggest competitors WP Engine and Flywheel as examples.

These hosts offer three plans and one custom plan for enterprise customers. This isn’t unusual for web hosts, but it does leave huge gaps in each company’s pricing structure.

There are also certain features only available in second-tier and higher plans. For example, if you require a WordPress multisite setup, you’ll need the Pro plan, which is $60/month, or higher with Kinsta. This feature will cost you $115/month with WP Engine and Flywheel.

Kinsta is powered by Google Cloud Platform, which gives you access to 20 data center locations around the globe as a Kinsta customer. The servers use an advanced setup incorporating Nginx, LXD containers, PHP 7.4 (7.1, 7.2 and 7.3 are also supported) and MariaDB.

This base infrastructure gives Kinsta’s hosting environment a fast and secure framework to start with, but let’s explore how it expands from there.

As a managed WordPress host, Kinsta offers numerous features designed to increase the speed and overall performance of your site. A lot of these features are functionalities you’d typically need to implement through plugins or your own code. 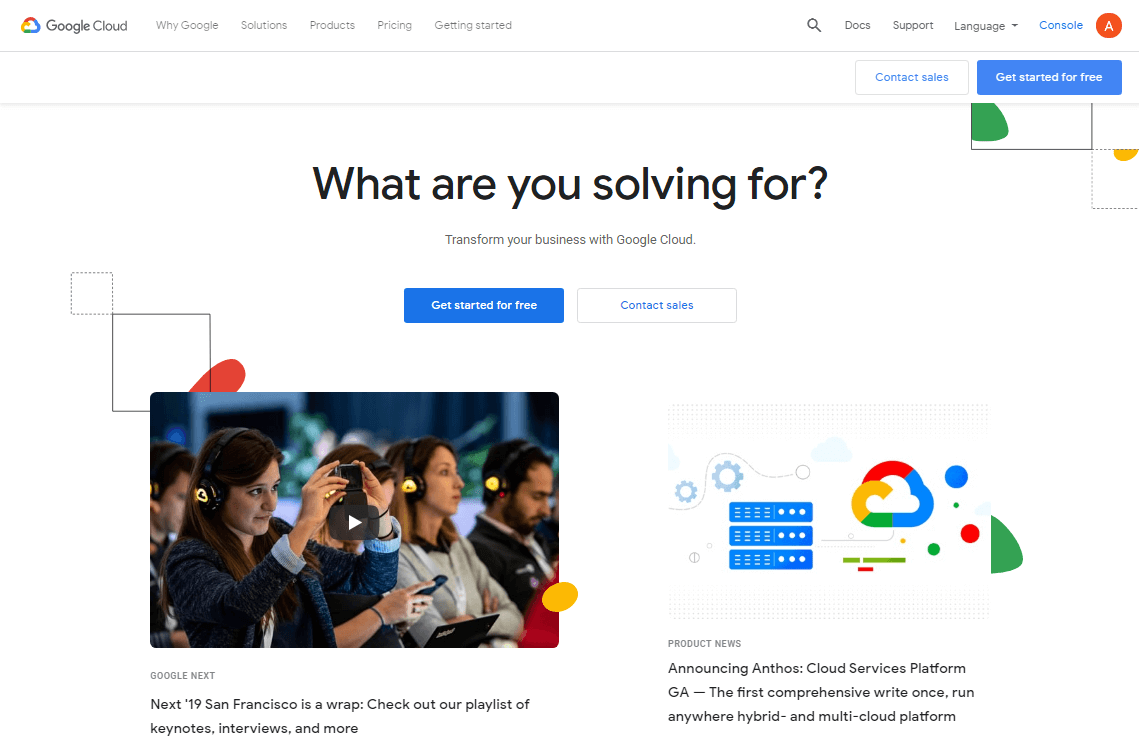 A lot of this performance comes from the base of the hosting infrastructure mentioned above. The cloud hosting servers powered by Google Cloud Platform are much faster and more reliable than shared and VPS hosting servers.

They also have the ability to scale automatically if needed, an essential feature for sites that receive random surges in traffic. Kinsta even has case studies you can view that demonstrate how their servers were able to sustain several WooCommerce sites during national marketing campaigns.

Furthermore, they offer server-level caching and free CDN services via KeyCDN on every plan, though each plan has a different bandwidth limit. The built-in caching functionality means you won’t be able to use third-party caching plugins. Fortunately, Kinsta’s server-level caching provides much better performance than the application-level caching these types of plugins implement.

As far as speed and performance goes, here are a few page speed metrics with different functionalities enabled. I performed two tests with a basic test website. Test A was conducted with only Kinsta’s basic hosting setup. Test B was conducted with optimized JS and CSS files. 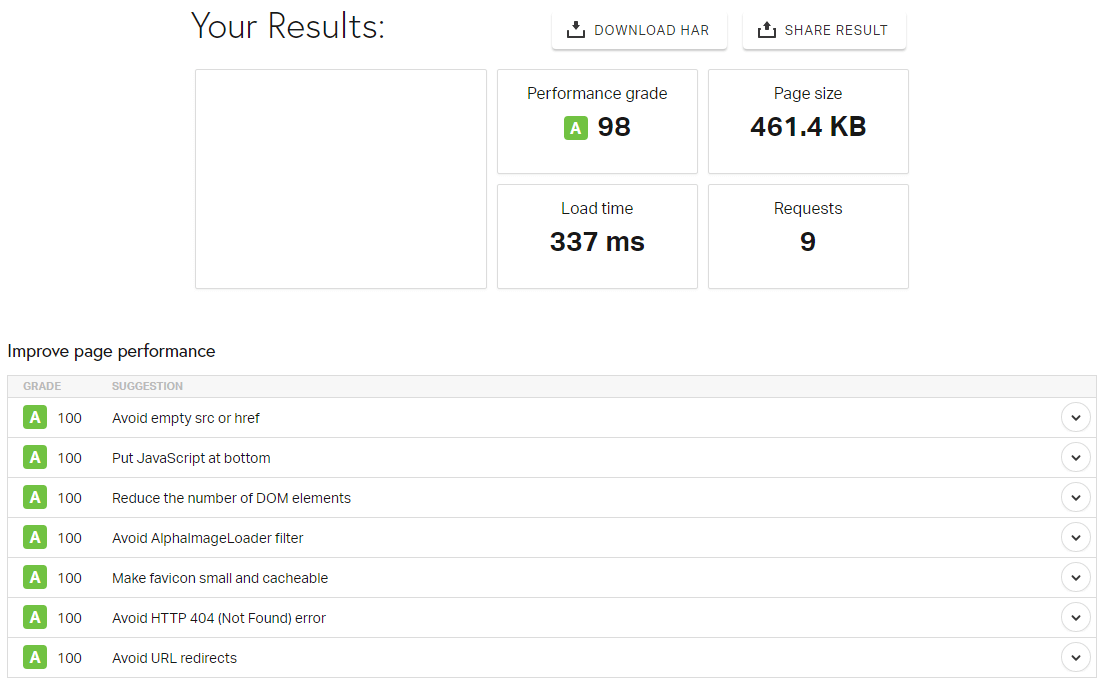 If you want an idea of how well Kinsta performs with a production website, check out our results at Pingdom for MH Themes, which is hosted on Kinsta’s servers.

If you typically use WP Rocket’s optimization functionalities, know that Kinsta does allow you to activate the plugin with caching disabled. Similarly, Kinsta doesn’t allow every image optimization plugin on the sites it hosts as a way to prevent “performance impacts” these plugins can inflict. Plugins that optimize on external servers, e. g. Imagify, ShortPixel, Optimole, EWWW Cloud, Optimus, etc. are all completely fine to use at Kinsta.

Kinsta also implements uptime monitoring which checks that your site remains online every two minutes or 720 times a day. The company’s uptime guarantee is 99.9%, and they vow to compensate you if it falls below that percentage in a monthly billing period.

Security is another aspect of web hosting Kinsta covers for you. The only thing they recommend doing is acquiring extra DDoS protection through Cloudflare or Sucuri. Like caching, this means you won’t be able to install third-party security plugins, including Wordfence and iThemes Security. 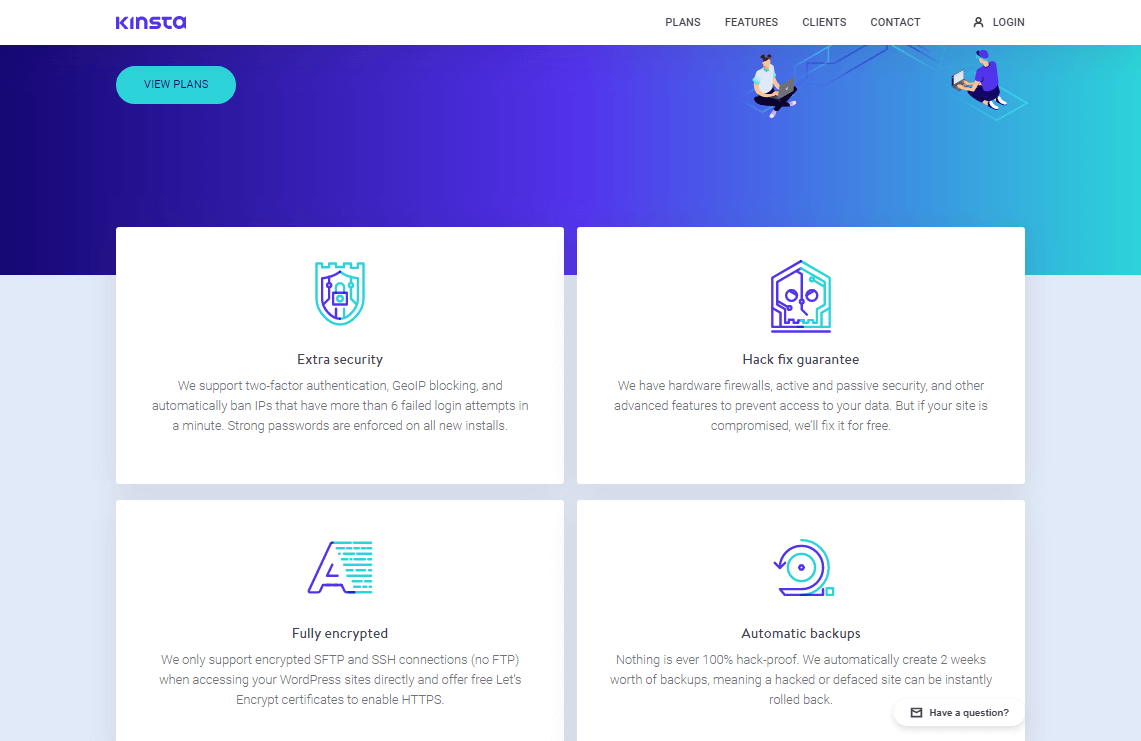 Kinsta’s firewall is placed at the server level, for starters, rather than being based on PHP. The uptime monitoring is also part of their security arsenal as are the daily backups offered with every plan. While this prevents you from installing most backup plugins (incremental backup plugins are allowed), it does give you enough flexibility to render such plugins useless.

Kinsta hosting also comes with malware scanning and free automatic hack fixes as extra layers of security. You’ll also have access to a free SSL certificate from Let’s Encrypt, and it supports third-party certificates as well.

The icing on the cake, so to speak, comes in the form of only allowing SFTP and SSH over FTP, enforcing strong passwords for WordPress admins, and banning IPs after six failed login attempts.

The MyKinsta hosting dashboard is intuitive and features a clean, user-friendly user interface. Its layout uses standard sections inline with other managed WordPress hosts, though Kinsta does go a few steps further with features like analytics and reports. 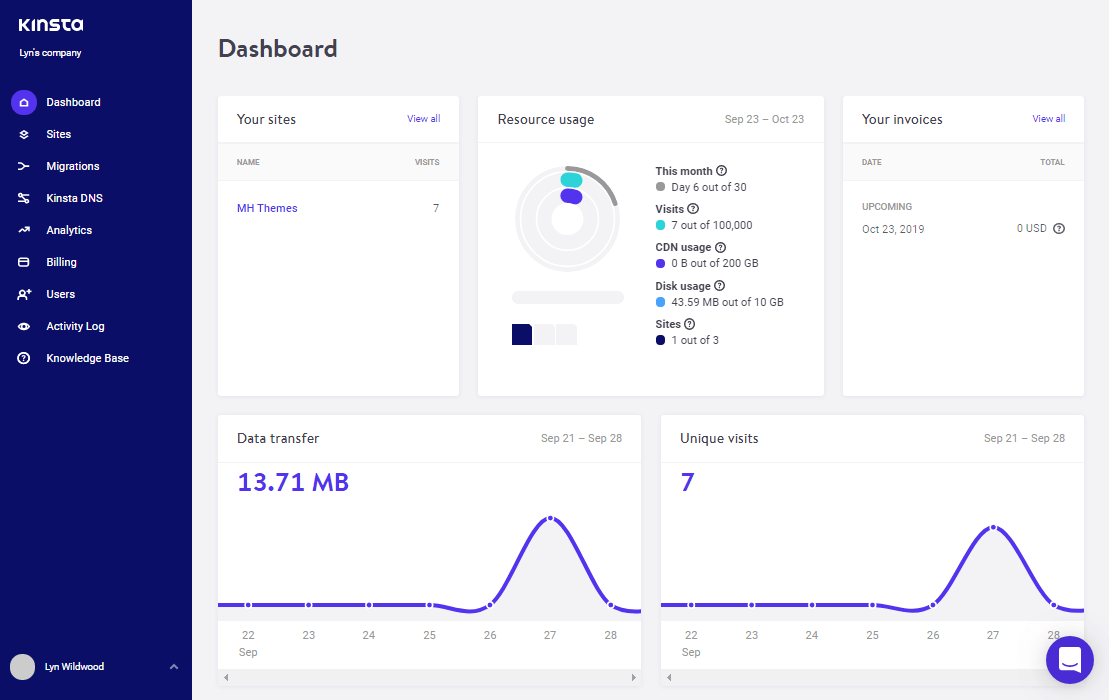 When you’re new to Kinsta, you’ll use the Sites or Migrations sections. These allow you to add new or migrate existing sites onto Kinsta’s servers. Creating a new WordPress site with Kinsta, for instance, only took a few minutes for me with the Sites section. 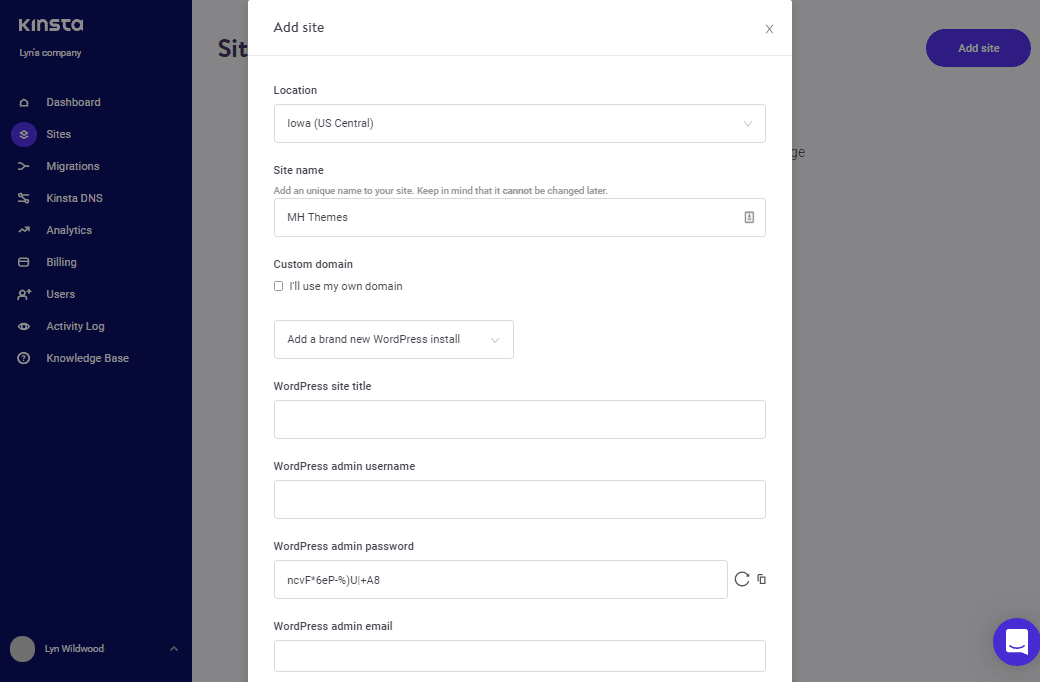 You can also use this section to migrate an existing site manually on your own. If you’re new, you have access to one free migration, which you can request in the Migrations section. New customers are eligible for this service even if their sites use complex setups, such as ecommerce, membership platforms or reverse proxies.

With Kinsta’s analytics, you can monitor the resources your site uses, CDN usage, the devices your visitors use, performance and more. 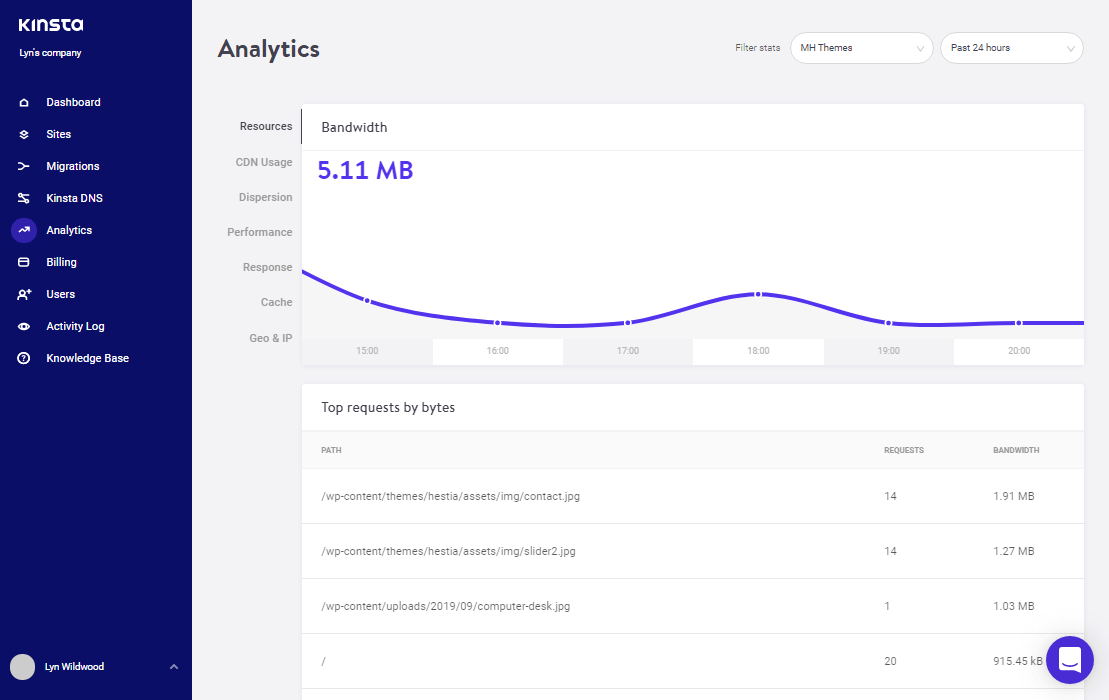 The dashboard is also where you can use Kinsta’s various tools, such as backups, clearing the cache, enabling SSL, and more. 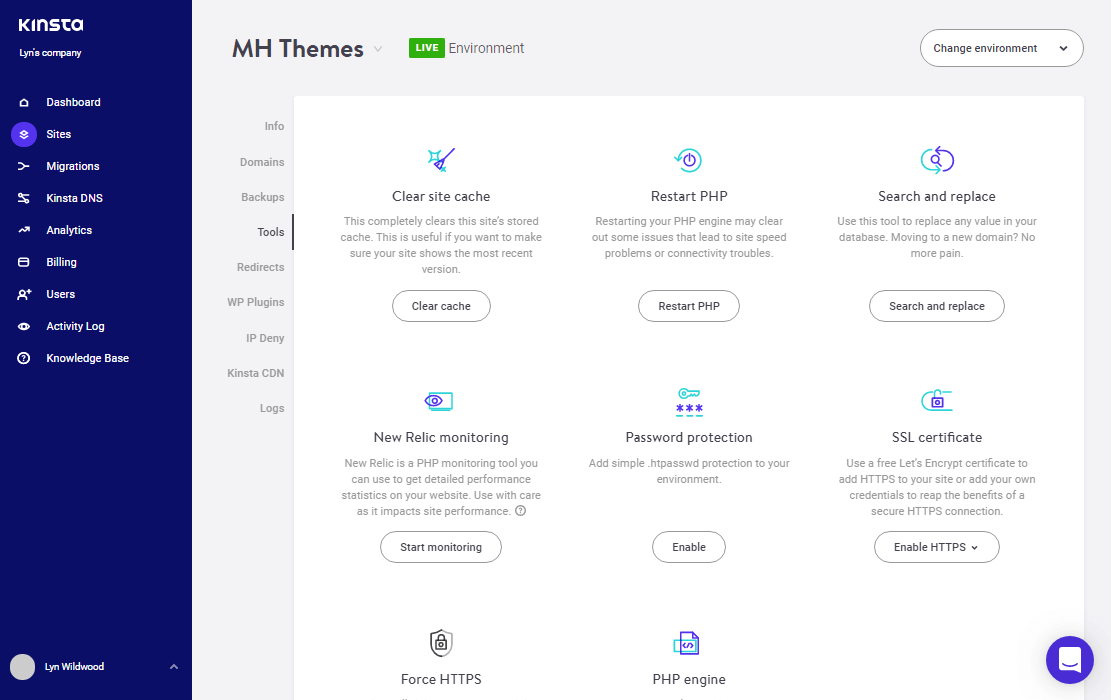 Kinsta also has features aimed at developers, including staging areas, the ability to switch between PHP versions on your own, and support for WPI-CLI and Git. Flywheel, in contrast, locks down your wp-config file to the point where you can only edit it by requesting support to do so for you. While Git is supported, you can only use WP-CLI if you use Flywheel’s own local development software Local.

Flywheel also strips down database access and limits you to their UI and setup. Kinsta gives you full access to phpMyAdmin. All in all, when it comes to technical details like this, there’s a lot that Kinsta allows you to do freely within the dashboard while other managed WordPress hosts either require you to contact support to have them done for you or don’t allow you to do them at all.

Let’s wrap up this review.

Kinsta is a fantastic WordPress host that offers an impressive server setup and a suite of useful, developer-friendly features. On the flip side, its UI is simple enough for non-developers to use. Plus, with WP Engine acquiring Flywheel to the point of Flywheel changing their plans to mimic its parent company’s (and to support its new cloud hosting infrastructure), Kinsta is one of few independent managed WordPress hosts left with cheaper, simplified pricing options.

The only disadvantage Kinsta might have for advanced users and developers is that some few third-party plugins aren't allowed. But since you can use image optimization plugins that optimize on external servers as well as backup plugins that are incremental and security plugins like WordFence, there shouldn't be any need for a lot of other third party solutions. Kinsta is even partners with WP Rocket.

Kinsta’s pricing starts at $30/month for one site, 20,000 visits and 10GB of storage. You’ll receive two months free of charge if you pay annually, and all plans are backed by a 30-day, money-back guarantee.