WP Engine is a powerful managed WordPress host that offers cloud computing for scalable hosting environments and enough tools and flexibility for developers to play around with.

As their name suggests, WP Engine is entirely optimized for WordPress. Let's take a look at everything they have to offer WordPress users and how their services measure up to similar hosts. 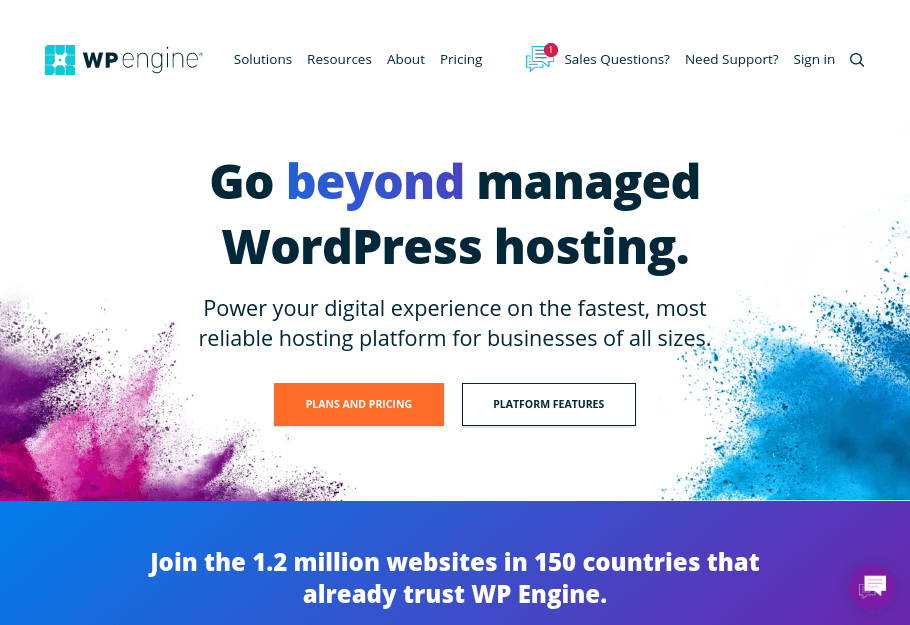 WP Engine offers three plans and a custom plan for websites that receive at least a million visits per month. The plans offer more or less the same set of benefits. They differ in the technical specs they offer, which range in the following parameters for the main three plans:

Features like WP Engine's proprietary caching system are available on all plans. You'll only receive 24/7 phone support and imported SSL certificates with the top-tier plans, however.

This means that while the host's servers for the cheapest plan are designed to support 25,000 visits/month, they'll scale automatically and draw on more resources when you receive traffic spikes that exceed this number.

The specific cloud platform your site uses is dependent on the plan you choose. The three main plans are powered by Google Cloud Platform while the custom enterprise plan, which uses a dedicated environment, is powered by AWS.

Regardless, you'll be able to choose from a list of data centers each service offers. Both Google Cloud Platform and AWS offer multiple data centers in North America, Europe, Australia and Asia. 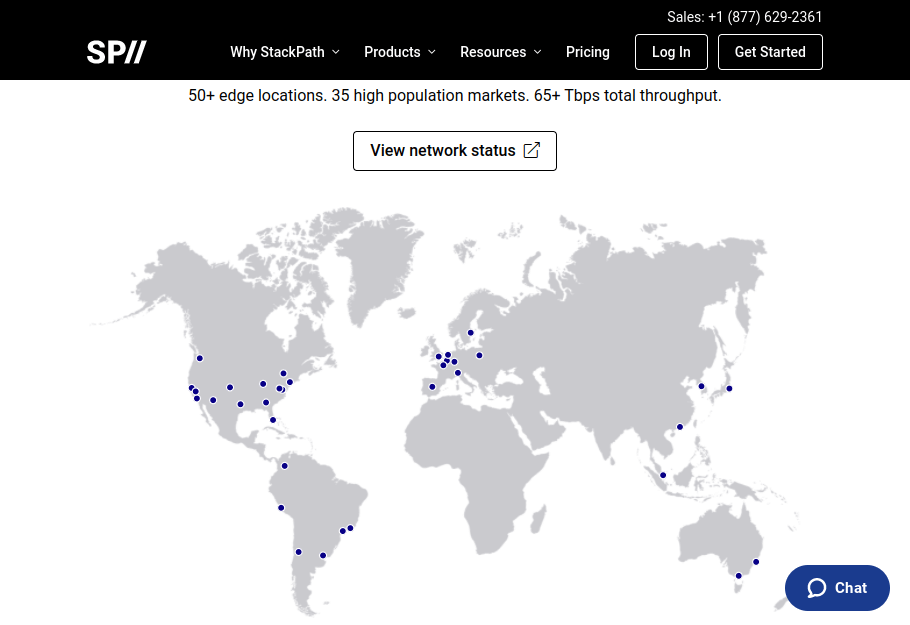 This allows you to install your site on an origin server that is closest to where your target audience lives. To ensure your site delivers fast speeds and high performance no matter where your users are located, WP Engine's infrastructure integrates with StackPath's content delivery network, which uses edge technology and over 50 points of presence around the world.

To solidify the boost in performance StackPath gives you, WP Engine uses its own caching system, named EverCache, that caches your content at the server level. Plus, because WP Engine is optimized for WordPress, they add new caching rules specific to the CMS on a consistent basis.

Lastly, PHP 7.4 and HTTP/2 are enabled by default, and WP Engine is quick to support new iterations of these technologies.

All of this sounds good on paper, but how does WP Engine perform on real sites?

According to WhoIsHostingThis.com, WP Engine offered the following performance metrics:

ShivarWeb tested a website hosted by WP Engine in an unoptimized state and received a load time of 2.52 seconds, which leaves room for a lot of improvement and even better speeds for optimized sites.

WP Engine protects your site in multiple ways, including features like free SSL certificates from Let's Encrypt and DDoS protection. 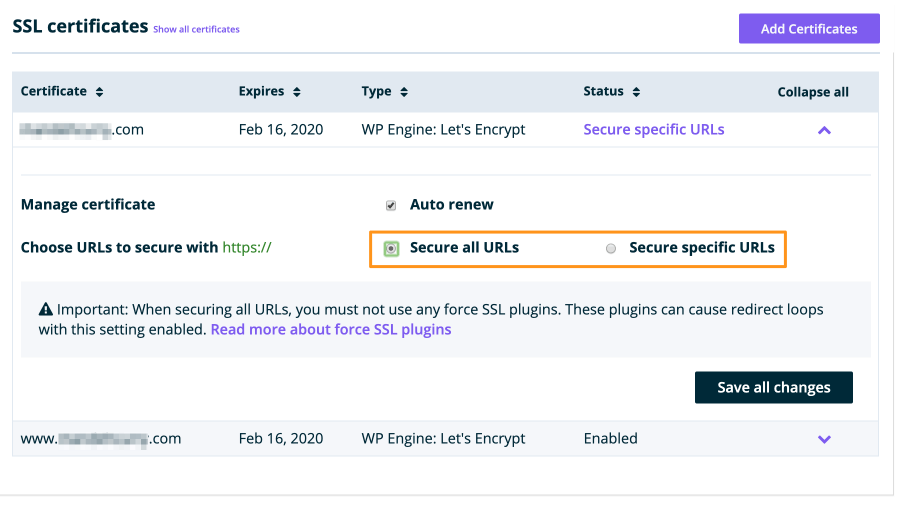 Its biggest line of defense is its proprietary web access firewall (WAF). This uses a sophisticated, automated system that detects malicious traffic and blocks it from accessing your site. It's able to discern good traffic sent by real users and search engine crawlers from bad traffic sent by hackers and scraping bots.

The host's WAF does a great job at keeping malicious traffic at bay, but what happens when something does get through? WP Engine blocks requests to scrape your blog posts as malicious bots often use this tactic to uncover a site's author IDs. Such information makes account hacking and brute-force attempts much easier to achieve.

Furthermore, disk write privileges are limited with WP Engine, so even if malicious traffic slips past the host's WAF and you're using a non-secured theme or plugin that's prone to malicious injections, they aren't able to do much. All attempts to write to the disk are logged as well so you can pinpoint bad actors.

Managed WordPress hosts are known for restricting certain plugins from being installed on your site, specifically plugins that interfere with the security and performance services the host already provides for you. WP Engine is no different, and they even go a step further by disallowing plugins known for being vulnerable to attacks.

Unfortunately, the host's services are lacking when it comes to malware scanning and removal. Unlike other managed WordPress hosts, WP Engine does not scan your site automatically. You'll have to provide a specific reason as to why you believe your site has been hacked. They'll then submit your site for deep-level scanning and cleaning (you have to contact support to submit this request), which can take as long as 24 hours.

This is in contrast to other managed WordPress hosts who scan your site on a regular basis and clean it if malware is found, all of which occurs without you having to contact support.

Fortunately, WP Engine does offer regular backups and a restore service. Up to 60 restoration points are available at a time as backups are stored offsite on Amazon S3 servers. You can even implement partial restorations if you only want to restore your site's directory or database.

What Else Does WP Engine Offer?

Let's talk about the additional features WP Engine has to offer, starting with a feature that piggybacks off of the last feature we mentioned.

WordPress updates can wreak havoc on a website, which is why the host includes a restore feature that enables you to roll your site back to a previous state. However, you can also test updates yourself beforehand by creating a staging environment.

This is easy to set up in the host's dashboard, but you can also use their free local development tool to get the job done.

WP Engine's acquisition of Flywheel gave the host the opportunity to integrate Flywheel's local WordPress development application, Local, with its own hosting services. You're now able to use Local in a state that's optimized for WP Engine. 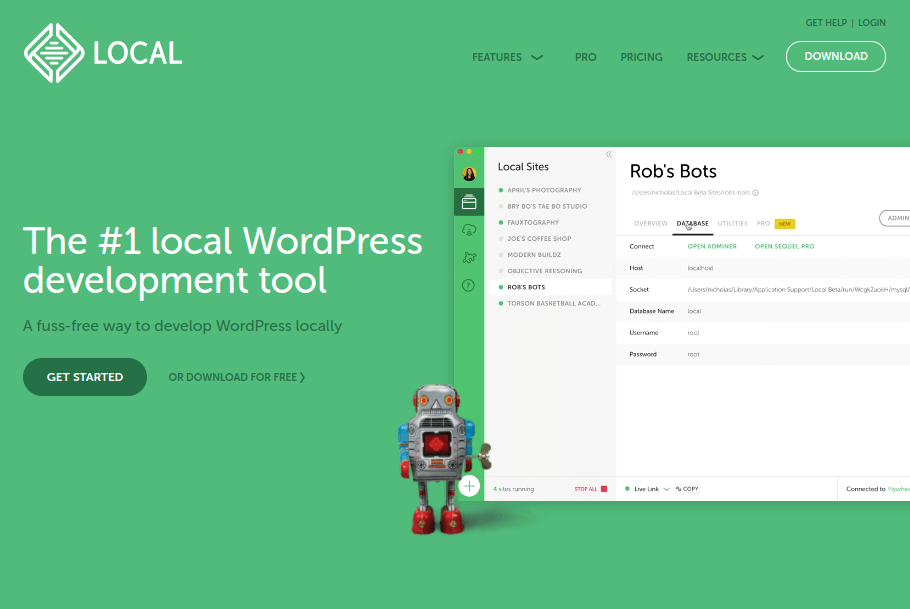 Local is a free local server application for WordPress that enables you to create new sites and make changes to existing ones from your desktop then push those changes to a live environment on WP Engine's servers.

WP Engine also acquired StudioPress in 2018. All customers have access to the Genesis Framework, over 35 StudioPress themes and Atomic Blocks (now Genesis Blocks), a set of Gutenberg blocks, free of charge as a result of this.

For developers, WP Engine offers SSH access and the WP Engine API, which allows you to automate such tasks as creating new environments and managing domains.

The host also has a tool called GeoTarget. It allows you to serve content based on where your user is located. For instance, if you're from the United States but also sell products to customers living in the United Kingdom, you can display prices in pounds and hide products and services you don't offer to British customers when they view your site.

You can design different landing pages for different regions, which is great if you'd like to deliver content in your customers' native languages. However, you can just as easily use the tool's simple shortcodes to show or hide certain region-based elements.

Lastly, WP Engine has a WordPress monitoring tool you can use to keep track of performance errors from the host's dashboard. This goes beyond uptime monitoring, which you can also do with this tool. You're able to pinpoint opportunities to optimize your site by identifying MySQL issues with plugins, themes and APIs your site uses.

You can also view throughput metrics, load times and which pages your users visit most. It's an especially essential tool for developers as it can shorten the development process by pinpointing exactly where a site is experiencing errors and performance issues.

WP Engine is without a doubt one of the most powerful hosts for WordPress as well as one of its biggest managed hosts. Their server infrastructure powered by AWS is able to support large sites that receive millions of hits per month, such as news and magazine websites. This is why the host is used by such names as WPBeginner, WebDevStudios and SoundCloud.

It's clear WP Engine is intended for fast-growing sites that receive a lot of traffic or numerous traffic spikes. It's also great for advanced users and developers. This is mostly due to the features they offer, such as multisite site only being available on enterprise plans or the fact that malware is something you'll need to find on your own before WP Engine will do anything about it.

It also has to do with WP Engine's pricing structure. They offer $30/month as a base price, but the next tier quickly shoots up to $115/month. Give WP Engine a try if you're a developer, have an advanced project to host or simply expect to receive a lot of traffic quite quickly.

We also recommend a number of additional shared and managed hosts for WordPress if you need suggestions for simpler projects.